On TCM 10/3/16- Another masterpiece directed by John Huston – Fat City (1972) screenplay by Leonard Garner based on his novel, music by Kris Kristofferson, Cinematography by 3 time Oscar winner Conrad Hall with touching performances by Stacy Keach as aging boxer Billy Tully, Jeff Bridges as Eddie Munger, the 18-year-old hopeful boxer, and Oscar nominated here Susan Tyrrell as Oma, the hard drinking barfly—a cast and crew which transforms the actual Stockton, CA locations into a dismal place rivaling a city painted by artist Edward Hooper. I was lucky enough to screen Fat City introduced by Stacy Keach at the 2016 TCMFF (photo below) and it is very engrossing on the large screen of the TCL Chinese Theatre. 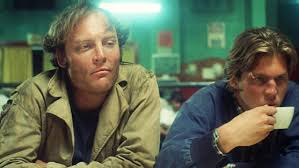