On TCM Mon 8/1- Scarlet Street (1945)-Legendary director Fritz Lang and screen great Edward G. Robinson (ingenious at capturing many different screen personas without changing his outward appearance) introduce the great undiscovered to himself and the world class artist Christopher Cross-ironically a man of low self-esteem living in a sad Noir world with happiness only from his own art. It is very disturbing that he lets himself become a sap for lowlifes Kitty and Johnny (Joan Bennett and Dan Duryea in flawless performances) who lead Cross onto the Noir path to doom. Compare the cold manipulative Kitty captured by Lang’s camera with the Cross portrait-“painting is like falling in love.” 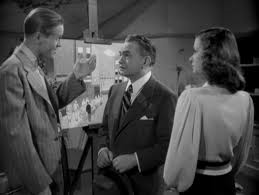 On TCM Mon 11/28/16- Vincente Minnelli’s The Bad and the Beautiful (1952) -Dick Powell as bestselling writer James Lee Bartlow tells us: “I started to work.”… And we are treated to the numerous way his charming wife Rosemary brilliantly played by Oscar winning here Gloria Grahame interrupts her husband’s creative process. Gloria always gave a movie stealing performance and worked with other notable directors—Catch Gloria light up the screen in: Edward Dmytryk’s Crossfire (1947) as Ginny, the tough understanding lady with a heart for a lonely soldier; Nicholas Ray’s In a Lonely Place (1950) where she gets involved with another screenwriter Dixon Steele played by the great Humphrey Bogart, and Fritz Lang’s The Big Heat (1953) as Debbie, the gangster’s ex who turns stoolie for tough cop Glenn Ford and a victim of thug Lee Marvin. Gloria Grahame was one of the screen’s all time greats.

A gem on TCM later today 7/28/16- Light in the Piazza (1962) – Always a pleasure to discover a very well-acted engrossing tear jerking movie with yet another Oscar caliber performance from Oliva de Havilland playing a mom here to challenged Yvette Mimieux and fun to watch the twists and turns of the Italian characters played by Rossano Brazzi (What is he going to do next?) and his son by George Hamilton—I was moved by the sensitive direction of Guy Green known a few years later for A Patch of Blue (1965).

On TCM Sat  9/24/16 – Shane (1953) – Without much dialogue genius director George Stevens using a little movie technique magic catches the developing loving deep friendship between the homesteaders (The Starretts played by greats Van Heflin, Jean Arthur, and as their son in an Oscar nominated role Brandon De Wilde) with the trying to settle down gunfighter brilliantly played by Alan Ladd…Catch the precise use of the post-production process of a “dissolve” which is a gradual transition from a fade-out of one image to a fade-in of a new image employed to show when the Starretts realize that Shane is a sincere hardworking friend—just the continuous beautiful music of Victor Young on the soundtrack and the sound of the chopping axes along with this expressive dissolve tell us of the bond with Shane.