From the opening credits over preview vignettes to the ending Fort Apache (1948) (perfectly cast with John Wayne as the savvy Captain York; Henry Fonda cast against type as by the book Lt. Col. Thursday with Shirley Temple as his daughter; the great Ward Bond as Medal of Honor winner Sgt. Maj. O’Rourke with John Agar as his son 2nd Lt. O’Rourke) is a cinematic masterpiece set in the primordial Monument Valley, Utah where John Ford artistically composes every shot of his characters within this vast landscape to tell us about the passing of a generation within a military tradition. Love the sequence where Agar courts Shirley (his then real life wife)  in defiance of her snobbish father Fonda by taking her out riding in this vast landscape and the Fordian choreography/music scoring in the noncommissioned officers dance event which artistically defines Fort Apache society. 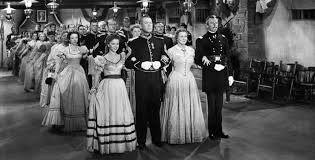