To celebrate the 104th birthday of screen great Victor Mature –Catch here where the master John Ford with his usual brilliance cast Victor in My Darling Clementine (1946) as an educated Doc Holiday who knows his Hamlet well enough to complete the lines of Alan Mowbray as actor Granville Thorndyke doing a Tombstone saloon Shakespearean gig-featuring here other greats Henry Fonda as Wyatt Earp and Walter Brennan as Old Man Clanton. Who else other than pappy Ford would bring Hamlet into the movie western? 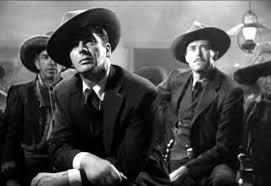