In Steven Spielberg’s 1941 (1979)-When timber merchant Hollis P. Wood played by comic genius Slim Pickens is taken prisoner on a WW II Japanese sub and sees a German office on board – he reaches the brilliant conclusion that there is a conspiracy between Japan and Germany- “I knew it you guys are in cahoots with each other!” 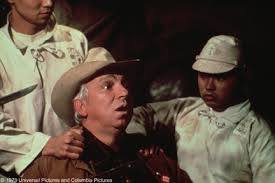