On TCM 10/8/16- Paths of Glory (1957) – With masterful camera work and scriptwriting Stanley Kubrick delivers a powerful anti-war message with great performances by Kirk Douglas as honorable military lawyer, Adolphe Menjou as the indifferent political general, and Timothy Carey as the poor scapegoat private.  Kubrick was the master director who always had his camera in the optimal position to give his message the most impact. Catch the extreme close up of Carey being sentenced to death within a large palace courtroom and that long tracking shot of Kirk walking in disgust through a network of trenches packed with fearful troops. 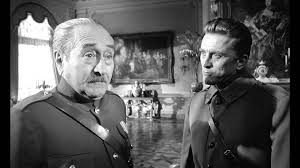