On TCM today Christmas 2016-Friendship (as highlighted by a brilliant theme from the Rozsa soundtrack) in William Wyler’s  Ben-Hur (1959)- Childhood pal Messala played to perfection by Stephen Boyd certainly turned out to be a false friend to Oscar winner here Charlton Heston as Judah Ben-Hur. But I would love to have a friend like Charlton Heston had here rooting him on – Horse loving Sheik (Hugh Griffith in an Oscar winning role). Although the Sheik was from a different religious background (“One God OK..But One Wife?”), he befriended and supported Heston in defeating his now arch enemy Stephen Boyd in the chariot race. 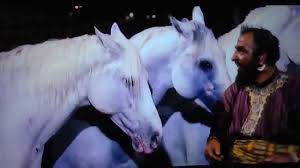