On TCM Sun 9/4/16- NOIR masterpiece Out of the Past (1947) – “I sell gasoline, I make a small profit. With that I buy groceries. The grocer makes a profit. We call it earning a living. You may have heard of it somewhere.” Jeff Bailey (The great Robert Mitchum) opens up a gas station in bright pastoral Bridgeport, California attempting to escape from the evil dark Film Noir world populated with the likes of screen greats Jane Greer and Kirk Douglas. As articulate as Mitchum is in his masterful voiceover narration, Jimmy (Dickie Moore), the deaf and mute kid who works for him at this gas station communicates via sign language and facial expressions true respect and admiration for Jeff Bailey. 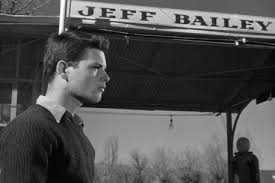